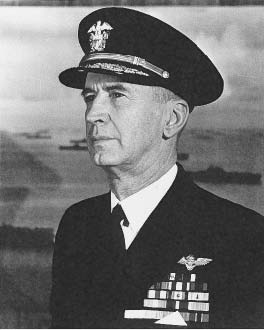 The Second World War provided America with some of its finest hours both as a nation and as a people. Freemasons in this same era also provided Americans with some of their most notable leaders including Presidents Roosevelt and Truman; Army commanders typified by Generals Arnold, Bradley, MacArthur, and Marshall; and the subject of this sketch, Fleet Admiral Ernest Joseph King. Described by military historian Mark M. Boatner III as "brilliant" and "irascible," Brother and Sir Knight King served as Chief of Naval Operations through most of the conflict.

Ernest King was born in Lorain, Ohio, on November 23, 1878, the son of an Irish immigrant, James Clydesdale King, who had migrated to America prior to the Civil War, and Elizabeth Kearn King. A grandfather on his mother's side had been a sawyer in the Royal Navy dockyard at Plymouth, England, which may have prompted young Ernest's interest in a naval career. In addition, an article in the Youth's Companion, the leading juvenile magazine of the day, also stimulated his interest in the sea. According to one story, inspired by an old sailor who lived nearby; he almost ran away and went to sea at the age of seven. In September 1897 at eighteen and having recently graduated from Lorain High School, King entered the U.S. Naval Academy at Annapolis as a cadet. According to one story, his railway mechanic father furnished him with a return pass on which to get back home if he changed his mind, but the ticket remained unused. When Congress declared war on Spain in April 1898, the teenage student saw temporary duty aboard the USS San Francisco. The Spanish-American War soon ended, and young King returned to Annapolis and continued his studies, graduating on June 7, 1901, ranking 4th in a class of 67.

Two years at sea followed, on the USS Eagle, after which Ernest King received his commission as an Ensign.

During the Russo-Japanese War, the young officer served on the USS Cincinnati, a "protected cruiser'' observing the first major conflict of the new century. Promoted to Lieutenant on June 7, 1906, King served a two-year stint as an instructor at the Naval Academy. Meanwhile, on October 10, 1905, he was married to Martha Egerton of Baltimore, Maryland, in West Point, New York. The marriage lasted until the Admiral's death over fifty years later and resulted in six children, five of them girls. After a third year at Annapolis as a member of the academy's Executive Staff, King returned to sea duty for three years beginning with a year as an Aide on the USS Minnesota. Promoted to Lieutenant Commander on July 1, 1913, the rising officer received his first command post on April 30, 1914, on the USS Terry. The Terry was involved in the occupation of the Mexican port city of Veracruz and led to the future Admiral becoming a recipient of the Mexican Service Medal. This assignment proved to be brief because in less than three months, he became commander of the destroyer USS Cassin. In 1916 he joined the staff of Admiral Henry T. Mayo (Mayo was a member of Burlington Lodge No. 100 in Burlington, Vermont), who became Admiral of the Atlantic Fleet during World War I. Promoted twice during the conflict, King became a Commander in July 1917 and a Captain in September 1918. According to historian Boatner, this experience working closely with the Navy's top Admiral, provided King: ''valuable insight into the problems of high command within an alliance and taught him leadership principles he would use thereafter, how to decentralize authority and develop initiative among subordinates while maintaining strong control at the top."

After the war Captain King returned to Annapolis until mid-1921 when he took command of a refrigerator ship, the USS Bridge, for some fifteen months. Since German submarines had provided the Allies with some of their biggest challenges in the World War, it was hardly surprising that the naval establishment manifested considerable interest in this field of operation. Captain King was no exception, and after a lesser assignment dealing with U-boats, he became commanding officer of the Submarine Base at New London, Connecticut. A pair of disasters took place in the later twenties-both of which inspired topical ballas-that enhanced King's reputation for efficiency. The first occurred when the S-51 sank off Block Island on September 25, 1925, at a loss of 40 lives. The Captain received the Distinguished Service Medal for directing salvage. On December 17, 1927, another tragedy struck with the sinking of the S-4 near Provincetown, Massachusetts, with 37 fatalities. Although King had been elsewhere by that time, he was again placed in charge of the salvage operation and succeeded in raising the ship, winning a Gold Star for his efforts.

In mid-1926 the King assignment changed again when he was made commander of the USS Wright, what was then termed an "aircraft tender'' (later known as an aircraft carrier). At fortyeight he began rigorous rounds of flight training at Pensacola, Florida, and became a pilot in May 1927, afterwards returning to the Wright. However, he was soon appointed Commander of the Naval Air Station at Norfolk, Virginia. Then it was back to sea for more than two years at the helm of the USS Lexington.

In April 1933 Ernest King was promoted to Rear Admiral and also became chief of the U.S. Navy Bureau of Aeronautics. During his three years in this position, the Admiral advocated shifting of emphasis from battleship reliance toward aircraft carriers. Also, during those years Ernest Joseph King became a Mason. A petitioner to George C. Whiting Lodge No. 22 in the District of Columbia, the Admiral received his degrees on June 25, July 25, and September 12, 1935. Known as a "stickler for form" in the navy, King seems to have been much more relaxed in Lodge meetings which he attended frequently. According to one source, in the lodge he was content simply to be "one of the boys," and many of his Brothers never realized that he was a high-ranking navy officer. This attitude continued when he was transferred to California and promoted to Vice Admiral where he took the Capitular degrees in Darius Chapter No. 143 in San Diego on June 17, July 8, and August 26, 1938. The following year on July 12 and July 19, 1939, Admiral King received the Chivalric Orders in Holyrood Commandery No. 32 in Berea, Ohio (suburban Cleveland), near his hometown of Lorain. World War II interrupted further Masonic activity, but after the conflict, in 1946 he became a Noble of Al Koran Shrine Temple in Cleveland.

Back in Washington, D.C., King was appointed to full Admiral and named Commander-in-Chief of the Atlantic Fleet on February 1, 1941. In August the Admiral accompanied President Roosevelt to the Atlantic Charter Conference. Then came Pearl Harbor, followed by public and congressional clamoring for scapegoats.

Admiral Harold Stark was "out" and Admiral Ernest King was "in": Commander-in-Chief or as it was termed "COMINCH." In March Sir Knight King also held the title, Chief of Naval Operations. As with the Atlantic Charter Conference, King participated in many of the major strategy sessions including Casablanca, Cairo and Yalta. As a top leader in the "greatest generation," who also faced great challenges, Admiral King did his part to win the victory. Yet he did not do so without controversy. King's gruff exterior alienated many of his contemporaries, and British officers considered him rightly or wrongly as an "Anglophobe." One critic remarked that he was ''the most even tempered person in the...Navy...angry 100% of the time." Even FDR, with whom the Admiral generally enjoyed good relations allegedly described King as "a man who shaves with a blow torch." King himself was reported to have said at the beginning of American entry that "When the shooting starts, they call for the (expletive) of the (expletive)." Others complained that King was overly obsessed with the prestige associated with his high rank. Somewhat concerned about his bald head, he was always photographed wearing a cap. Yet he was congenial with civilians, especially ladies, and is described as an excellent dancer. He also manifested kindness and patience toward children.

Generally speaking, King aroused British ire by advocating that more Allied resources be allocated to the Pacific Theater. Conditions often led him to alter his positions, circumstances not unusual in challenging military conflicts. King did enjoy a harmonious relationship with Secretary of the Navy, Brother Frank Knox (of Bethel Lodge, No. 358 in Michigan). In the final analysis, one must conclude that nothing succeeds like success, and in this category King came out a big winner. 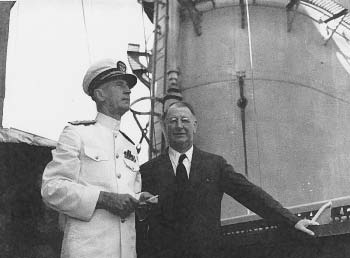 On December 17, 1944, Ernest King became the second American to hold the rank of Fleet Admiral (the first was William Leahy, with Chester Nimitz third, and finally William Admiral Ernest J. King and Secretary of the Navy, Frank Knox Halsey in November 1945). The war moved on toward Allied victory in September 1945. The harmonious relationship with Navy Secretary Knox ended with Knox's death in April 1944, and King feuded with his successor, James Forrestal. Retiring in December 1945, King had the satisfaction of seeing Nimitz named as his replacement by President Truman over Forrestal's objection.

In retirement Ernest King resided in Washington, D.C., but did serve as an advisor to the Defense Department after Forrestal was no longer involved. He also wrote and published his memoirs, Fleet Admiral King, in 1952. Eventually his health began to fail, and he spent his last days in the Naval Hospital at Portsmouth, New Hampshire. He died there on June 26, 1956, and was buried in Annapolis. In addition to a Navy funeral, George C. Whiting Lodge No. 22 held Masonic services. Martha King lived on until 1969. Of their children, three of the daughters-often referred to as "the King boys" - married army officers, and only one a naval officer. Ernest King, Jr., followed his father to Annapolis and a navy career.

The most complete life story of Sir Knight King is found in Thomas B. Buell's Master of Sea Power: A Biography of Fleet Admiral Ernest J. King (Naval Institute Press, 1995). A shorter sketch of the Admiral's life through 1942 is found in Current Biography (1942). Another useful sketch is that in Mark M. Boatner Ill's The Biographical Dictionary of World War II (Presidio Press, 1996). Considerable data on King can also be found on various web sites, especially an article by Brother R. A. Lord, "Ernest Joseph King Fleet Admiral" at www.masonicworld.com which discusses his life as a lodge member. A shorter version is that in William R. Denslow's 10,000 Famous Freemasons III (1959), pp. 24-25. All photographs are courtesy of the U.S. Naval Historical Center website.

Sir Knight Ivan M. Tribe, KCT, KYCH, 33°, and a professor emeritus of history at the University of Rio Grande, Rio Grande, Ohio, is a Past Commander of Athens Commandery No. 15, Athens, Ohio. He resides at 111 East High Street, McArthur, OH 45651-1111