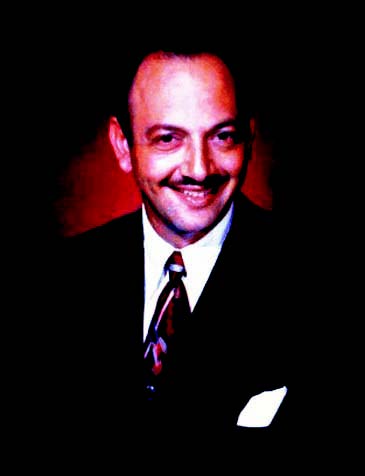 Brother Mel Blanc:
"The Man of a Thousand Voices"

Although the name of Mel Blanc may not be widely known, over the last seventy-five years untold millions, especially children, have heard his voice in one of its numerous forms. Virtually anyone who has watched a Warner Brothers cartoon has heard his voice as that of Bugs Bunny, Foghorn Leghorn, Porky Pig, and numerous other Warner characters. Blanc did numerous other voices and sounds during the "Golden Age of Radio" and other cartoon voices as well. A lesser-known fact concerning Blanc is his long affiliation with the Order of DeMolay, blue lodge Masonry (fifty-eight years), the Scottish Rite, and Shrine. Entertaining children at Shrine hospitals became one of his principal causes in life.

Melvin Jerome Blank (spelling of last name later legally changed) was born to a Jewish family in San Francisco, California on May 30, 1908. The Blank family, which also included an older brother, Henry, soon moved to Portland, Oregon where Melvin grew to adulthood. For the most part, the youth proved to be an indifferent student, interested only in music and entertaining his friends with voice imitations. Some faculty were impressed while others were not. One unappreciative teacher told him "you'll never amount to anything" adding "you're just like your last name, blank"; Mel legally changed it as soon as he came of age. On the positive side, he joined Sunnyside Chapter of DeMolay in 1925. He held the group in high esteem for the rest of his life. In 1966, he received the Legion of Honor. On April 27, 1987, Blanc was inducted into their Hall of Fame commenting at the time, "I have been a member of DeMolay for sixty-three years. I thank God and DeMolay for helping me become kind and thoughtful to my parents and all my friends. I had many opportunities to do the wrong things, and I might have done them if it had not been for DeMolay. God bless them."

Intrigued by show business, Melvin watched vaudeville performances whenever he could and also saw opportunities in the new medium of radio. Station KGW went on the air in 1922, and Blanc who dropped out of school prior to graduation, sang there with friends on a program called The Hoot Owls. Since local radio paid only a pittance, the young dropout supported himself primarily as a tuba player. Initially interested in the violin, he switched to the big horn because there were few tuba players and he could get more work. After a couple of years he returned to Portland as pit conductor at the Orpheum Theater. However, vaudeville was on the decline, and with the onset of the Great Depression, it went downhill at an accelerated pace and eventually died.

Mel did, however, scrape up enough money to petition Mid Day Lodge No. 188 in Portland. He received his Entered Apprentice degree on November 20, 1930, and was passed a Fellowcraft on January 5, 1931. Blanc was raised on March 12, 1931. No one recalls whether he took his oral examination with different voices. Although he remained a faithful member of Mid Day Lodge for fifty-eight years, Blanc had virtually no opportunity to serve as an officer because he left Portland that summer for California where he lived most of his life thereafter.

Mel figured that if he was going to make it in show business, then he would have to go to Hollywood. On his way southward he stopped for several months in San Francisco where he took a job as emcee and sometime joke teller in a variety program called The Road Show. Again, it did not pay much, but ethnically-diverse San Francisco enabled him to develop and assimilate a wide variety of dialects. Hollywood remained his ultimate goal where opportunities awaited in sound motion pictures, fledgling network radio, and perhaps musical work. Nonetheless, with the country mired in the Great Depression and more job seekers than positions, Brother Blanc did not expect success to come easily.

Small speaking parts and sounds on network radio programs became Blanc's principal forte, but he seldom cleared more than twenty-five dollars a week in those early days. He did meet his future wife, Estelle Rosenbaum, whom he married in 1933. Some years later the couple had a son, Noel. Eventually, better and more regular parts came Mel's way, but first he returned to Portland for a time where he did most of the male parts and wrote the scripts for a program called Cobwebs and Nuts. Estelle loaned her voice to the show, portraying such girls as the coquettish "Toots Waverly" and the snooty "Mrs. McFlaggpoople IV." After a time, Mel's imagination wore thin and the Blancs returned to Hollywood.

Soon Brother Mel landed regular voice parts on such network radio shows as Jack Benny, George Burns & Gracie Allen, and Judy Canova. However, voices in animation art (or cartoons) really led to major success. In 1936, he became the voice of Warner Brothers cartoon star, the stuttering "Porky Pig" although he was not the original Porky. Later he added "Daffy Duck" and most notably "Bugs Bunny" who ultimately became the biggest cartoon "star" in the studio's animation department headquartered in the old wooden building known as "Termite Terrace."

As the decade of the forties ensued, Mel Blanc created additional voices to match new characters created by Warner artists. Often the creations were antagonistic to each other: "Tweety" and "Sylvester," "Henery Hawk" and "Foghorn Leghorn" (my personal favorite). Bugs Bunny, and Daffy Duck had two "human" rivals in "Yosemite Sam" and the hapless "Elmer Fudd" (the latter usually voiced by Arthur Bryan). New creations voiced by Blanc that came along in the fifties included the French skunk "Pepe LePew," the Mexican mouse "Speedy Gonzales," "Marvin the Martian," and the "Tasmanian Devil." In addition, he voiced many lesser figures in Warner cartoons and continued in network radio as long as the comedy dramas remained on the networks. Before he had an exclusive contract with Warner, during the decade of the 1950s, he voiced the Walter Lantz creation "Woody Woodpecker." Although he gave up this voice, Lantz Productions continued to dub in the distinctive laugh associated with Woody, a laugh Mel had originally created to irritate his high school principal many years earlier.

Outside of his voice work in cartoons, Mel Blanc had some other achievements. In the 1946-1947 season, he had a CBS network radio program, The Mel Blanc Show, a sit-com in which he was the hapless owner of a fix-it shop. He had a pair of hit records "The Woody Woodpecker Song" and "I Taut I Saw a Puddy Tat" based on Tweety and Sylvester. He also voiced numerous commercials ranging from the "Frito Bandito" to "Toucan Sam" in Fruit-Loop advertisements. After his exclusive contract with Warner Brothers expired in 1960, he continued to do voice work for them but did other cartoon voices as well including "Barney Rubble" on The Flintstones, "Cosmo Spacely" on The Jetsons, and the cat Heathcliff, the first two characters being products of the Hanna-Barbera company. 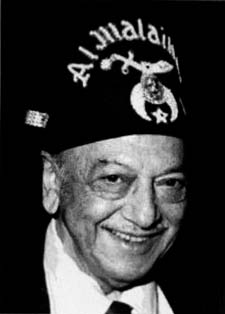 Brother Blanc continued Masonic related activity becoming a member of the Scottish Rite Valley of Los Angeles, taking his degrees from June 14 through June 16, 1951, giving his occupation as a "motion picture voice artist," and Al Malaikah Shrine Temple on June 29, 1951. Given his God-given talents, one might correctly expect Noble Mel to be drawn to Shrine Hospital work. In his autobiography he wrote, "when I was teenager, I used to pass by the Portland Shrine Hospital located not far from my parents home. Hearing about the work they did with crippled children was what initially piqued my interest in the fellowship and prompted me to seek admission."

Mel Blanc as a Shriner "spent countless hours with the youngsters" adding "I don't know who appreciates whom more, me or them. 'Do Bugs Bunny! Do Tweety! They . . .shout excitedly.'" Then on January 24, 1961, the person Rich Little called "the greatest voice man of all time" had a near brush with death. Brother Blanc's car was one-half of a head-on collision on Sunset Boulevard. He sustained numerous broken bones including thirty-nine fractures in his right leg and a severe concussion and lost nine pints of blood. For three weeks he was in a coma. Blanc finally responded only when his physician, seeing a Warner Brothers cartoon on the TV asked, "How are you feeling today, Bugs Bunny?" Mel replied in his best known voice, that of the brash rabbit. "Eh, just fine Doc, how're you." He then replied to another question when asked of Porky Pig, complete with stutter. He credited the two cartoon animals with restoring his senses if not his life. After two more months in the hospital during which time he did some Barney Rubble sound tracks propped up in bed, he went home.

Thankful that he had gotten his life back, Brother Mel began to do more charity work. He wrote, "As soon as I was able to get around, I stepped up my number of appearances...at Shrine hospitals." Going to "the Los Angeles Shrine Hospital for the first time since my accident was very emotional for me," he wrote. He explained why, "As I sat talking in Sylvester's voice to a darling little girl, I thanked God for not revoking this undeserved gift."

Although he walked with a cane for some time, Mel Blanc's voice was as strong as ever. While Warner Brothers turned out fewer cartoons from 1960, Mel continued to voice them (until 1969), and Hanna-Barbera TV programs provided plenty of work. With son Noel, he founded Mel Blanc, Associates and turned out numerous advertisements some of which proved quite lucrative. In the 1980s Warner's produced some new animated films and Mel's familiar "what's up Doc" was as strong as ever. However, he did let others do voices of those who yelled loudly a great deal, such as Yosemite Sam and Foghorn Leghorn.

In 1988, Warner Books published Brother Blanc's memoirs, That's Not All Folks. Among other things, he noted that his voice totals were more like 850 rather than the thousand which public relations releases often claimed for him. In the volume he discussed his network radio days, how cartoons were made, his friendships with such notables as Jack Benny, his work with Shrine hospitals, and his close family. The memoir closes with his eightieth birthday party, held in 1988 at the Warner lot in Burbank, answering the question as to when he planned to retire with the short reply, "the day I drop."

Unfortunately, that "day" came a little over a year later. In early July, Brother Blanc was hospitalized and fell out of bed, breaking a femur. Complications soon set in causing a stroke; he died on July 10, 1989. A Warner animation artist, Darrell Van Citters, drew a memorable art work that featured a spotlight on a microphone with Bugs Bunny, Daffy Duck, and seven other Warner cartoon characters with their heads bowed in silence. Widely reprinted, it was appropriately titled "Speechless." In addition to the more conventional information, his tombstone contains the famous sign-off on Warner Brothers cartoons, "That's All Folks." 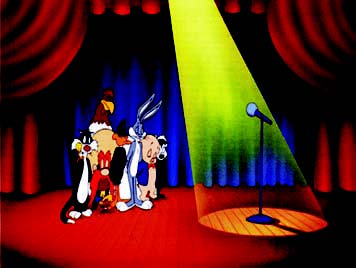 Sir Knight Tribe, Ph.D. is a professor emeritus of history at the university of Rio Grand in Ohio, and a holder of the KCT, KYCH, and 33o. He has been a regular contributor to the Knight Templar magazine for many years and resides at 111 E. High Street, McArthur, OH 45651