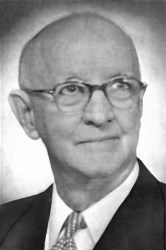 William Catron Gordon
37th Grand Master of the Grand Encampment
(19th in a Series on our Past Grand Masters)
by George L. Marshall, Jr., PGC

William Catron Gordon was born at Waverly, Missouri, on August 11, 1878, the only child of Colonel James Andrew (1841-1920) and Margaret Elizabeth Catron Gordon(1843-1937). When he was about one year old, his parents moved to Marshall, Missouri, and he received his elementary and secondary education in the Marshall public schools, graduating from high school in 1894 before he was sixteen years old. In the fall of that year, he entered Missouri Valley College at Marshall and graduated in 1898 with a B.A. degree. In the fall of 1898, he entered Harvard University, where he received the B.A. and M.A. degrees in education.
In the fall of 1900 he went to Minneapolis, where he taught Greek and Latin in high school for two years, and in 1902 he went to Kansas City, Missouri, where he remained for six years, teaching languages there also. A 1903 faculty photo of Sir Knight Gordon is shown below. On June 22, 1904, he married Miss Leonora Yeager (1879-1932), daughter of a prominent Kansas City lawyer. To this union, two children were born; William Catron Gordon, Jr. (1905 - 1986) and Mary Margaret Gordon Buckner (1910–1993).
On January 1, 1908, he left his education career to accept the position of cashier at the Farmers Savings Bank of Marshall. Here he demonstrated business qualifications of the highest order. He subsequently succeeded his father as president of the Farmers Savings Bank. He served as treasurer, vice president, and president of the Missouri Bankers Association and organized the agricultural work of that organization. He served several years on the agriculture commission and executive council of the American Bankers Association. He also served as president of the Marshall Chamber of Commerce and as a member of the board of trustees of Missouri Valley College as well as president of John Fitzgibbons Hospital. He was a member of the Christian church, where he served as a deacon.
He was raised February 12, 1900, in Trilumina Lodge 205 of Marshall and served as master in 1913; was exalted in Saline Chapter 74, Royal Arch Masons on July 12, 1900, where he served as high priest in 1911; was greeted in Centralia Council 34, Royal and Select Masters on January 19, 1914; and was knighted in Missouri Commandery 36 of Marshall on August 22, 1900, serving as commander in 1912 and as grand commander of Missouri in 1932-33. He was a Noble in Osman Shrine Temple in St. Paul, Minnesota.
He He was elected junior warden of the Grand Encampment in 1940 and progressed up the line to become grand master at the XLV Triennial Conclave in 1952.
William Catron Gordon died on January 10, 1959, in Marshall, Saline County, Missouri, and is interred along with his wife and children in Ridge Park Cemetery in that city.

Right Eminent Sir Knight Marshall, KYGCH(3), KCT, 33°, is a past grand commander of the Grand Commandery of Knights Templar of Alabama. He is a member of the Editorial Review Board of the Knight Templar magazine and has published several articles in that magazine as well as in the Royal Arch Mason magazine. He can be reached at geomarsh@yahoo.com