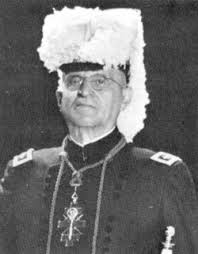 Most Eminent Sir Knight DeLamater, founder of the Eye Foundation, has a most interesting history. He was born in New York City, on April 18, 1880, son of Washington Irving (1855-1893) and Clara DeLamater (died 1917), descendants of the DeLamaters who, under the name of DeLamater Iron Works, were the builders of the Monitor of the historic Monitor-Merrimac battle during the war between the states. DeLamater, Sr. was the first president of the Village of Rhinebeck, New York, founded in 1688.

Walter DeLamater's illustrious career covered a broad range of interests. He was a soldier with a brilliant WWI record in combat and on important staff assignments; an executive in a broad range of industries and businesses, retired as an associate with large organization and a consultant primarily on matters of organizati management, research and development, sales promoti0n and public relations Young DeLamater was educated in New York City public schools and St. Mark's private school. In 1901, at the age of 21, he married Marie West who died on March 31, 1940. They had two children, Marie Lillian (Mrs. Herbert Norton) and Walter, Jr. (1906-1967). His second wife was Rosalind Gladys Huies (1905-1999) whom he married on March 4, 1942. To this union was born three daughters; Joanne, Claudette, and Dolores.

His public career began on March 2, 1900, when he enlisted as a Private in the 71st Infantry, New York National Guard. He became the only person in the Regiment's long history, datiing back to 1850, to rise from a Private to a Major General. In 1916, he served in the Mexican Border affair for which he received special commendation for acting under extremely trying circumstances.

Remaining in the service through WWI, he was engaged in several difficult campaigns in France; received a number of awards, decorations and citations for exceptional bravery and distiguished service under heavy shell fire without regard for his personal safety; repaired roads open to traffic and supervised the evacuation of wounded under deadly shell fire, remaining exposed at all times without regard for his personal safety.

He had been promoted from Major to Lieutenant Colonel in the 106th Infantry. Soon he was transferred to the 79th Division in France and became Assistant Chief of Staff, then to the 77th Division as Chief of Staff, and was promoted to full Colonel by 1920. By the end of the war, he had received numerous awards and citations for exceptional bravery as well as for brilliant staff work, many times performed under deadly shell fire. For this he was awarded the Distinguished Service Medal. He had been promoted to the rank of Major General.

Then a soldier citizen, upon request by Mayor Fiorello LaGuardia and approved by President Franklin D. Roosevelt, although he was a Republican, Major General Walter A. DeLamater, Retired, was appointed Federal Civil Works Administrator of New York City. Several important civilian assignments followed.

He was raised a Master Mason in Halteman Lodge No. 412 at Middletown, New York, on July 26, 1917. As might be expected, this extraordinarily energetic and talented individual joined and rose rapidly in the many degrees, orders, and rites of Masonry. He was Knighted in Yonkers Commandery No. 47 of New York State on March 17, 1921, and moved up rapidly through the lines. He was elected Right Eminent Grand Commander of the State of New York, in 1934 and was elected to the Grand Encampment line in 1937.

It was during the Grand Conclave in 1946 that we first heard the story of Sir Knight DeLamater's vision he had while still anesthetized for an operation, that heavenly bodies, angels, admonished him that if he lived he must do some thing to heal the blind as Jesus had done when on earth and about his miraculous recovery from near death. He firmly believed that his recovery must have been for some divine purpose. He told of being stricken and paralyzed in 1941 for a period of two months from a clot on the brain. During those two months, the doctors attending said it was impossible for him to live and that there wasn't one chance in a million of his doing so. After the physicians gave him up, why then and for what purpose was he saved?

Prior to the September 20-26, 1952 Triennial Conclave in New Orleans, Louisiana, Deputy Grand Master Walter Allen DeLamater began his campaign in earnest. With all the skills of a public relations consultant he launched his campaign promoting Knights Templar Eye Hospitals in connection with existing hospitals throughout the United States, thus fulfilling the admonitions of his vision "to heal the blind."

The idea of a hospital or hospitals for the blind led to many long debates and bitter arguments prior to and during the Grand Encampment meeting Arguments were still going on in the halls and cloak rooms before the meeting was called to order by Most Eminent Grand Master William Catron Gordon. At the conclusion, the original resolution and amendments included, instead of "Eye Hospitals," the words Eye Foundation". After a vote, the Grand Master declared "the chair rules that the resolution is adopted by the required three-quarters vote," but following the break, another three hours were consumed, resulting in around twenty-five additional proceeding pages, containing resolutions and clarifications which finally resulted in a final and conclusive vote which again passed by three-quarters vote. 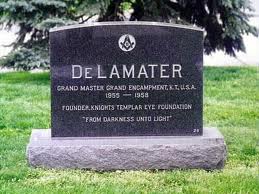 Most Eminent Sir Knight DeLamater passed away on August 25, 1973, and was buried with full military honors in Arlington National Cemetery. On his tombstone (above) is engraved his status as Grand Master and his proudest achievement in Freemasonry, that of founder of the Knights Templar Eye Foundation.

Right Eminent Sir Knight Marshall, KYGCH(3), KCT, 33°, is a Past Grand Commander of the Grand Commandery of Knights Templar of Alabama. He is a member of the Editorial Review Board of the Knight Templar magazine and has published several articles in that magazine as well as in the Royal Arch Mason magazine. He can be reached at geomarsh@yahoo.com.