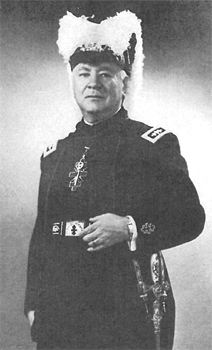 Louis Henry Wieber
39th Grand Master of the Grand Encampment
(20th in a Series on our Past Grand Masters)
by George L. Marshall, Jr., PGC

Sir Knight Wieber was born at Cleveland, Ohio on December 31, 1889, the son of Henry (1862-1952) and Lena (Tielke) Wieber (1865-1946). He also had a sister, Emma L. (Wieber) Becker (1892-1969). After attending local elementary and high schools, he enrolled at Western Reserve University Law School, from which he graduated in
June of 1910. He was admitted to the bar in July of 1910 and practiced that profession the rest of his life. He was a member of the Cleveland Bar Association, the Cuyahoga County Bar Association, and the Ohio State Bar Association.
He married Elsie Striebing (1894-1978) of Cleveland, Ohio, on July 12, 1917. One daughter was born to this union, Gloria (Wieber) Newhof (1920-2012). During World War I, he served in the infantry. He graduated from Central Officers’ Training School at Camp Gordon, Georgia.
He was a member of Pilgrim Congregational Church in Cleveland. He was a member of the Board of Trustees of the Cleveland Public Library and served as its president. During World War II, he was a member of the Selective Service Board. Although he displayed great interest in civic affairs, he was never a candidate for public elective office. He was an honorary member of the United Swiss Societies of Cleveland and a member of the American Turners.
Masonically, he was raised in Concordia Lodge 345 in Cleveland in October of 1911 and was a member of Hillman Chapter 166, Royal Arch Masons in Cleveland; Woodward Council 118, Royal & Select Masters in Cleveland; and Holyrood Commandery 32, Knights Templar in Cleveland. He was elected grand warder of the Grand Commandery of Ohio in 1930 and as grand commander in 1938.
His Scottish Rite bodies were in Cleveland, and he received the 33° in 1936. Other memberships included: member and past potentate of Al Koran Shrine Temple and a member of the Royal Order of Jesters. He was a member and past sovereign of St. Benedict Conclave, Red Cross of Constantine and a member of the National Sojourners, the Heroes of ’76, and Our Saviour Tabernacle, Holy Royal Arch Knight Templar Priests
At the 41st Triennial Conclave of the Grand Encampment in 1940, he was appointed grand captain of the guard, and progressed through various appointive and elective offices culminating in his election and installation as most eminent grand master of the Grand Encampment at the 47th Triennial Conclave in 1958.
Most Eminent Past Grand Master Wieber died on May 30, 1964. He and his wife are entombed in Sunset Memorial Park, North Olmstead, Ohio.