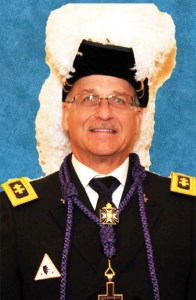 Archibald Bull was born at Hoosic Falls, New York on July 16, 1789. After completing his training in law he settled in Troy, New York, where he started his legal practice. In 1829 he was elected Clerk of Rensselaer County and in 1834 he was a member of the New York Assembly. From 1857 to 1859 he served as judge of the Court of Common Pleas of Rensselaer County and won a reputation as an honest, upright and able jurist.
In 1860 he accepted a government position and moved to New York City where he made his home during the remaining years of his life. He is listed in Trow's New York City Directory as a lawyer for 1862 to 1865. He died on December 22, 1865 in New York City, but was buried at Troy, New York.
Archibald Bull was raised in Apollo Lodge No. 49 (now No. 13) at Troy, New York, on April 16, 1810. He served as Secretary of this lodge during 1824 and 1825. He was a charter member of King Solomon's Primitive Lodge No. 21 which was granted a charter on June 4, 1842.
He was exalted in Apollo Chapter No. 48 at Troy, New York in 1840.
It is not clear when he received the degrees of the Scottish Rite. In the Proceedings of the Supreme Council of the Northern Jurisdiction, the following entry on June 5, 1842 is of interest:
"Unanimous approval and consent having been given to the bringing forward and ultimate initiation to the highest degree and membership of this Grand and Supreme Council of thirty-third degree, of our very worthy Bro. Archibald Bull of Troy, Prince of Jerusalem, Grand Master of the General Grand Encampment of Knights Templar for the United States of America, and Killian H. Van Rensselaer of New York City, Prince of Jerusalem, it was unanimously agreed upon to initiate them at the earliest opportunity."
The initiation took place on June 20, 1845. For a number of years Bull took an active part in the work of the Supreme Council along with Giles F. Yates of Schenectady and Killian H. Van Rensselaer of New York, and later of Cambridge, Ohio.
Bull was knighted in Apollo Commandery No. 15 at Troy, New York, on April 8, 1840. He served as Eminent Commander in 1842 and again in 1843.
In 1844 he was elected Grand Commander of the Grand Commandery of New York. That same year he attended the Conclave of the General Grand Encampment held at New Haven, Connecticut, as the representative of the Grand Commandery of New York. He served on the Committee of Doings of the General Grand Officers, and on the Committee on Finance. His ability and pleasing personality brought him recognition, and at the election he was selected as the General Grand Master.
He presided at the Conclave of 1847 in Columbus, Ohio, at which the following resolutions were adopted:
Resolved, That the thanks of this General Grand Encampment be presented to the M.E. Sir Archibald Bull for the able, courteous, and dignified manner in which he has presided over the deliberations of this body.
"Resolved, That a committee of three be appointed to procure and present to the Past General Grand Master, Sir Archibald Bull, an appropriate jewel."
The General Grand Treasurer, Sir E. A. Raymond, reported in 1850:
"Jan. 26, 1849 - Cash paid for Past Grand Master's Jewel for Sir Archibald Bull, $31.00."
The proceedings of the Grand Encampment show no further report of his activities in Templary.