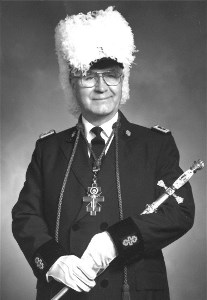 Donald Hinslea Smith was born in Cleveland, Ohio, and grew up in Detroit, Michigan, where he was educated in the public schools. He began his career life simultaneously with the beginning of the Second World War, serving from the week of Pearl Harbor until he retired as a Lieutenant Colonel in April 1964. He served as a combat infantry officer in Europe in 1944-45, and in 1946 transferred to the Military Police Corps, the branch in which he was serving when he retired. His service included the Korean Conflict and Vietnam. He was decorated for bravery and for meritorious service.
He entered Eastern Kentucky University upon retirement from the Army and graduated with honors in 1966, subsequently earning a Master of Science degree in Criminal Justice. He was an Assistant Professor of Police Administration and the University Registrar of his Alma Mater when he retired in 1985. He is a past officer in Phi Kappa Phi National Scholastic Honor Society; Phi Delta Kappa, Professional Education Fraternity.
He is married to the former Kathleen Virginia McCallum of Detroit, and they have two sons: The Reverend Donald H. Smith, Jr., of Homer, Michigan, and Mark M. Smith of Cincinnati, Ohio. Sir Knight Smith is a Deacon in the Berea, Kentucky, Baptist Church, where he taught a Men's Bible Class for twenty years.
Masonically, he was Raised in Atlanta Lodge No. 59, Georgia, from which he demitted in 1962 to become affiliated with Richmond Lodge No. 25 near his home in Kentucky. In the latter, he served as Worshipful Master in 1977. In the York Rite, Sir Knight Smith is a member of Richmond Chapter No. 16, Council No. 71 and Commandery No. 19, Richmond, Kentucky. He has served as High Priest of Richmond Chapter, and as Illustrious Master of R. & S.M. of Richmond Council, and has served as Grand Chaplain of both the Grand Chapter and Grand Council of Kentucky. He was Knighted in June 1960 and in 1969 was elected Eminent Commander of Richmond Commandery. In the Grand Commandery of Kentucky, Sir Knight Smith held the office of Grand Commander, 1974-75. He has served as Chairman of the Grand Encampment Committee on the Educational Foundation being appointed to that position at the 53rd Triennial Conclave by Grand Master Willard M. Avery.
Appendant membership includes: Kentucky Priory No. 25, Knights York Cross of Honour; Golgotha Tabernacle, Holy Royal Arch Knight Templar Priests, Kentucky; Kentucky Chapter No. 134, National Sojourners; St. Barnabas Conclave, Red Cross of Constantine, Louisville, Kentucky; Royal Order of Scotland and the Philalethes Society. He is Past Chief of Great Chief's Council, Knight Masons, U.S.A.; Past President of the Forty-Fivers; and holds the Honorary Legion of Honor, Order of DeMolay. He also holds membership in the York Rite Sovereign College and in the Scottish Rite Bodies of Lexington and Louisville; Oleika Temple, AAONMS, Lexington; Allied Masonic Degrees; Colorado College, SRICF; and Order of Eastern Star.
Elected Right Eminent Grand Captain General of the Grand Encampment, Knights Templar, on August 15, 1979, at Indianapolis, Indiana. Advanced to the office of Grand Generalissimo on February 16, 1980, following the death of William P. Wilson. Elected R.E. Deputy Grand Master, August 18, 1982, at Hot Springs National Park, Arkansas. Elected Most Eminent Grand Master, August 13, 1985, at Cincinnati, Ohio. Appointed Right Eminent Grand Prelate in 1996 by Grand Master Blair C. Mayford.