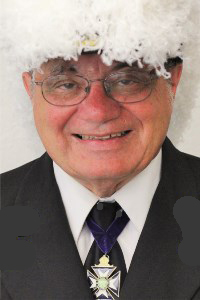 Sir Knight Baldwin began life's journey on October 28, 1935, in Concord, Massachusetts, the son of David S. and Hope W. Baldwin. He was educated in the Sudbury, Massachusetts secondary schools, graduating in 1953. He graduated in 1957 from the University of Massachusetts with a Bachelor of Business Administration. He received a Master of Science degree from George Washington University in 1974.
Sir Knight Baldwin began his military service on Flag Day, June 14, 1957 in the United States Army. He served in Vietnam and retired from the Army with the rank of Colonel. He had one son, Rick, and two daughters, Jodie and Julie. He passed to his eternal reward on February 5, 2009. On February 8, 2009, over 100 uniformed Knights Templar paid their last respects at his Knight Templar service held in Burke, Virginia. He is interred in Arlington National Cemetery.
Dick's Masonic resume is extensive and was listed in the Knight Templar magazine when he was elected our Grand Master. Templary was his love in the later years of his life. He served our Order as Commander of Arlington Commandery No. 29 and Grand Commander of the Grand Commandery of
Knights Templar of Virginia in 1989 - 1990. He served many years as the Grand Treasurer of Virginia.
He began his involvement with the Grand Encampment as chairman of the Committee on Easter Sunrise Memorial Service. His efforts in that position continue to be seen each year in Alexandria, VA. He was appointed an Honorary Past Department Commander in 1991, by the then Grand Master, William Henry Thornley, Jr., GCT.
In August 1997 he was elected Right Eminent Grand Captain General of our Grand Encampment from a field of five very qualified candidates. On August 16, 2006, he was installed as Most Eminent Grand Master of the Grand Encampment of Knights Templar of the USA in Houston, Texas. Certainly his Installation was a high point of achievement in his many years of service to our Fraternity.
Unfortunately, due to deteriorating health, he resigned as Grand Master on August 27, 2007. During his one year as Grand Master, his achievements were many. Templary is in his debt as many of the programs and plans he proposed came successfully to fruition.
He was a Past Monarch and Life Member of Ormazd Grotto, M.O.V.P.E.R.; served as Director of Publications and Grand Ambassador for the Supreme Council, Grottoes of North America; and was President of the Florida State Grotto Association in 1989-1990.He was a member of the Orlando Scottish Rite, served as Editor of their newsletter for 12 years; and was coroneted a 33rd degree in 2001. His other Masonic affiliations included the Orlando High Twelve Club; Seminole Chapter No. 373, National Sojourners; the Order of the Golden Key; Grand College of Rites; Grand Master's Council A, A.M.D.; Trinity Chapel, Order of St. Thomas of Acon; Great Chief's Council No. 0, Knight Masons; Masonic Order of the Bath of the U.S.A.; and Oxford Lodge No. 1, Ark Mariners, Ye Antient Order of Corks.
He was a good man and true and always had the best interests of Templary and Fraternity at heart.