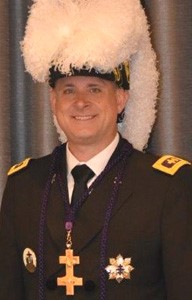 An acquaintance of twelve consecutive presidents, from Andrew Jackson to Ulysses S. Grant; public servant and administrator; and Grand Master of the Grand Encampment dur- ing the years of the Civil War, Ben jamin Brown French was born in Chester, New Hampshire to Daniel (1769-1840) and Mercy (Brown) French (1778-1802) on September 4, 1800. His father was a lawyer of high standing and was for several years Attorney General of the State of New Hampshire. After Mercy's death, Daniel married twice more. Benjamin received a good common school and academic education, and it was the earnest desire of his father and friends that he should enter college, which however, he did not do.
In 1819 he went to Boston hoping to go to sea. Failing to obtain a berth on a ship, he enlisted as a soldier in the United States Army and was stationed at Fort Warren on Governor's Island in the harbor of Boston. He was appointed a Sergeant soon after enlisting and faithfully performed his duty for about four months when, at the request of his friends who provided a substitute, he left the army on September 12, 1819. He then returned to his father's, and although conflicting to his own leanings, he began the study of law, which he pursued with diligence for five years, that being the time fixed by the bar rules of New Hampshire. At the February 1825 term of the Court of Common Pleas for the County of Rockingham, held at Portsmouth, he was admitted an attorney at law.
He was thus a lawyer by profession, and following his marriage in 1825 to Elizabeth Smith Richardson (1805-1861), daughter of Chief Justice of New Hampshire William Merchant Richardson, he became active in politics, serving as Assistant Clerk of the State Senate of New Hampshire (1828-1830). He was later elected to the New Hampshire State Legislature (1831-1833). While in the Legislature, he was the proprietor and editor of the New Hampshire Spectator.
French's chief contribution to an understanding of the 19th century is his eleven-volume journal of almost four thousand pages, which was begun in August of 1828 and was faithfully kept up until shortly before his death in the nation's capital in 1870. Roughly one third of the journal was published in one volume in 1989 under the title Witness to the Young Republic, A Yankee's Journal, 1828-1870, edited by Donald B. Cole and John J. McDonough. The remaining unpublished material, compris ing two-thirds of the journal, is housed in the Library of Congress which is now situated on the very site where French's mansion, built in 1842, was located. The unique aspect of French's journal is the keen insight provided into political life in Washington, D.C. The workings and the key players of every administration from that of John Quincy Adams to Ulysses S. Grant are faithfully recorded.
He moved to Washington, D.C. in December of 1833 to pursue government employment when friends in the state secured him an appointment in the Clerk's Department of the United States House of Representatives. He was appointed the Clerk of the United States House of Representatives in 1845. He left that position in 1847 when, encouraged by Samuel F. B. Morse, he became president of the Magnetic Telegraph Company. Serving in that position until 1850, French oversaw the expansion of telegraph communications throughout the United States. In 1853, French was named the Commissioner of Public Buildings under President Franklin Pierce and was the chief marshal of the March 1861 inaugural parade of Abraham Lincoln, who reappointed French Commissioner of Public Buildings. French had rejoiced in Abraham Lincoln's election in November and at the same time recoiled at the South's threat of secession. He had learned that his beloved wife Elizabeth had been diagnosed with breast cancer and had consented to a mastectomy (which was not successful). Elizabeth's death in May of 1861 was a profound loss for French. His family gathered round him to ease his grief. Mary Ellen Brady (1831- 1905), a sister of his brother Edmund's wife, moved in to manage his household. With time, a romantic attachment developed between Mary Ellen who was thirty years younger than French, and within a year and a half they were wed on September 9, 1862.
As the Commissioner of Public Buildings, French was responsible for the care of all federal buildings in Washington, D.C., including the United States Capitol.

After his appointment, French wrote in his diary on September 8, 1861:
"I was at the President's and saw Mrs. Lincoln and the President. Mrs. L. expressed her satisfaction at my appointment, and I hope and trust she and I shall get along quietly. I certainly shall do all in my power to oblige her and make her comfortable. She is evidently a smart, intelligent woman and likes to have her own way pretty much. I was delighted with her independence and her lady-like reception of me. Afterward I saw the President, and he received me very cordially."
His opinion of Mrs. Lincoln was to change significantly over the next four years. As with many presidential ap- pointees, his relations with Mrs. Lincoln suffered with time. His more routine duties as commissioner placed him in frequent contact with Mary Lincoln, whom French found to be difficult, calling the first lady a "bundle of vanity and folly." Since his appointment, he had ample opportunity to become acquainted with Mrs. Lincoln's love of money and her spendthrift ways with it. Thus, he kept a sharp eye on Mrs. Lincoln and winced suspiciously when she flattered him, but he was very patient with the "Republcan Queen." French wrote his brother that the "Republican Queen plagues me half to death with wants with which it is impossible to comply."
During his tenure, French also over saw the funeral arrangements for both Willie Lincoln (1850-1862) and President Lincoln (1809-1865). A few days after President Lincoln's assassination, French claimed to have prevented an earlier assault on Lincoln at the President's Inauguration on March 4. His journal relates the circumstances:
As the procession was passing through the Rotunda toward the Eastern portico, a man jumped from the crowd into it behind the President. I saw him, and told Westfall, one of my Policemen, to order him out. He took him by the arm and stopped him, when he began to wrangle and show fight.
I went up to him face to face, and told him he must go back. He said he had a right there, and looked very fierce and angry that we would not let him go on, and asserted his right so strenuously that I thought he was a new member of the House whom I did not know and said to Westfall 'let him go.' While were thus engaged endeavoring to get this person back in the crowd, the President passed on and I presume had reached the stand before we left the man. Neither of us thought any more of the matter until since the assassination when a gentleman told Westfall that Booth was in the crowd that day and broke into the line and he saw a policeman hold of him keeping him back. W[estfall] then came to me and asked me if I remembered the circumstance. I told him I did and should know the man again were I to see him. A day or two afterward he brought me a photograph of Booth, and I recognized it at once as the face of the man with whom we had the trouble. He gave me such a fiendish stare as I was pushing him back that I took particular notice of him and fixed his face in my mind, and I think I cannot be mistaken. My theory is that he meant to rush up behind the President and assassinate him and in the confusion escape into the crowd again and get away, but by stopping him as we did, the President got out of his reach. All this is mere surmise, but the man was in earnest and had some errand or he would not have so energetically sought to go forward....'