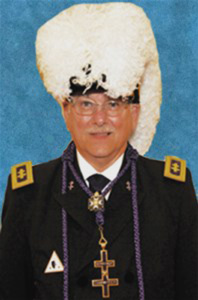 Jonathan Nye, second Grand Master of the Grand Encampment, was a Congregational Church minister who apparently held some views that were in conflict with that denomination and played a part in the controversy sur­rounding the Mormon Masonic Lodges (one of which was named in his honor) established at Nauvoo, Illinois, as we shall see later in this article.
He was born in Wareham, Massachusetts, on March 5, 1783, the son of David Nye, a Captain in the Plymouth County regiment in the Revolu­tionary War, and Desire Thacher.
He received the A.B. degree at Brown University in 1801 and the A.M. degree at the University of Vermont in 1808. He was educated as a Congregational minister and served in that capacity for twenty-three years in both Vermont and New Hampshire. On July 4, 1807, he married Mary Rhodes (1790-1837) at St. Albans, Vermont, and to this union was born four sons and three daughters, all of whom survived to adulthood.
As I alluded to in the opening paragraph, Nye had apparently formed ideas that were averse to the rigid dogmas of Congregationalism. What these were, specifically, I have not been able to find out, but one instance will support this supposition. Quoting from source 9, "The society [i.e., Congregational Society of Claremont] took the lead in calling the next pastor, Reverend Jonathan Nye. He received and accepted the society's call in the autumn of 1820, but it was not until the May following that the church was prevailed upon to accept him, and then not without many misgivings. He was installed on June 6, 1821, not, however, to enjoy a quiet ministry….The misgivings of the church proved to be too well founded. Mr. Nye was dismissed in 1828."
Tradition has it that after Mr. Nye was dismissed from his pastorate, charges were preferred against him as an unworthy member of the church, and he was subjected to a trial of considerable length. The charges seem to have been substantiated by proof, and Mr. Nye was called upon for any answer which he might have to make. He arose, and in a very cool and respectful manner said, in substance, that he had listened attentively to the proceedings, and while doing so it had occurred to him that if he were to be turned out of the church, it might be necessary for him to join it first. The fact was that he had never been admitted as a member of the Congregational Church [sic].
The last statement above is interesting, because we know that he was or­dained as pastor over the Congregational Church in St. Albans, Vermont, as his first pastorate on March 5, 1805. He was the second pastor of the Congregational Church at Newfane, Vermont, being installed there November 6, 1811, and dismissed therefrom on December 26, 1819. Further, he served in the capacity of a pastor for twenty-three years in both Vermont and New Hampshire.
Turning now to Nye's Masonic history, he received his Lodge and Chapter degrees while at St. Albans, Vermont, about 1805, as he is listed as a member of Champlain Chapter in 1806. For several years he was Grand Chaplain of the Grand Lodge of Vermont, and for a short time, he served as Grand Secretary. He was Grand Master from 1815-17. He entered the Grand Chapter of Vermont in 1807 and was elected Grand King. The next four years he was Grand Chaplain. He was created a Knight Templar in Vermont Commandery No. 1. He continued a member in Vermont Freemasonry until he settled in Claremont, New Hampshire, in 1820.
In 1821, he was appointed Grand Chaplain of the Grand Lodge of New Hampshire and served in that position for several years in addition to important committee appointments. In 1821, he was appointed Grand Chaplain of the Grand Chapter of New Hampshire and in 1822, was Grand High Priest. He was the first Grand Master of the Grand Council, Royal and Select Masters of New Hampshire, was elected on July 11, 1823, and served for four years.
He first appeared in the General Grand Chapter of Royal Arch Masons in 1806 when he was elected Grand Chaplain, and he held that office for twenty six years. In 1832, he was elected General Grand Secretary but declined the office. In 1835, only two General Grand officers were present for the opening, and Companion Nye presided until the General Grand King arrived. This was his last appearance in General Grand Chapter.
Nye was a contemporary of Thomas Smith Webb and Jeremy Ladd Cross, both of whom had a significant effect on the development of Craft Masonry and York Rite Masonry in the United States. The figure below is a graphic designed by Nye for inclusion in the 1819 edition of Cross' The True Masonic Chart or Hieroglyphic Monitor. Whether it was utilized by Cross in that book is unknown, but an examination of the Fourth Edition (1826), available online, fails to show it. It is, nonetheless, interesting for the symbolism evident in the design and shows that Nye apparently possessed a sizeable degree of artistic ability.

His first attendance at Grand Encampment was in 1826, at which time he was elected Deputy General Grand Master. Due to the death of General Grand Master DeWitt Clinton, he presided over the Fourth Grand Conclave and was elected to the office of General Grand Master in 1829, and at the Fifth Grand Conclave in 1832 was re-elected to that position. At the Fifth Grand Conclave, it was announced and discussed that anti-Masonry from the Morgan incident of 1826 was stunting the growth and the very existence of the Knightly orders. A resolution was adopted stating their consensus of "highly approving the firm and dignified manner in which the several encampments (i.e., Commanderies) had conducted their affairs relative to the persecuting and violent spirit with which they had been assailed by a po­litical party which, in assailing the orders of Masonry, aim a blow at all the free institutions of the country." At the Sixth Grand Conclave, also presided over by Nye, finances of the encampments were discussed, and it was voted that no encampment be allowed to confer the orders for less than $20.00. Seven degrees were recognized, including the four of the American Royal Arch: the Mark Master Mason, Past Master Mason (Virtual), Most Excellent Master, and the Royal Arch. The three knightly orders recognized included Knights of the Red Cross, Knights Templars [sic], and Knights of Malta. (Note the sequence of these orders which gave precedence to the Knights of Malta as being the chief order of Knighthood.) Additionally, a charter was granted to San Felipe de Austin encampment No. 1 of Texas in the Republic of Mexico.
In 1842, we find mention of him in the Proceedings of the Grand Lodge of Illinois. He was received with the honors due his rank. At that session, it was "Resolved, that the M.W. Jonathan Nye, P.G.M. of the Grand Lodge of Vermont be admitted an honorary member of this Grand Lodge, and be permitted at all times a seat in the same as such." Nye received an appointment as "Organizing" Lecturer. In this capacity he instituted "Mormon Lodges" at Nauvoo and elsewhere, one of which was named after him and another (Helm) named after another Grand Master.
Masons of nearby non-Mormon Lodges (in particular, Bodley) claimed irregularities in the conduct of the Nauvoo lodges. The concerns of Bodley Lodge had the desired effect, and the Grand Master suspended work of Nauvoo Lodge on August 11. Nye was appointed chairman of a special committee to visit Nauvoo and investigate the irregularities in the conduct of Nauvoo Lodge, U.D. (In nearly five months, that Lodge had initiated two hundred fifty-six candidates and raised two hundred forty-three). The committee accordingly visited Nauvoo to inspect the records and work. The committee recommended that the lodge be permitted to re­sume labor. Nauvoo Lodge did so much work that it became necessary to establish two more lodges in Nauvoo, Nye and Helm. (Ultimately, the Grand Lodge of Illinois revoked the dispensations of four of the Mormon lodges and the charter of the other was suspended.)
The last months of his life were spent in Iowa, and at a meeting when the formation of a Grand Lodge in that state was being considered, he was asked his opinion of the idea. His opinion being in favor, a committee was appointed to ad­dress the formation of a Grand Lodge in Iowa, but due to difficulties, the Grand Lodge was not established until 1844.
He had settled in Fort Madison, Iowa, and was preparing a speech to be delivered before the Masonic fraternity when he was stricken, and on April 1, 1843, he passed away and was buried in Fort Madison. Of him, his New Hampshire biographer said: "We have been unable to find a similar instance among all the prominent and distinguished fraters in the country, and it is an unmistakable evidence of his ability and merit."

Right Eminent Sir Knight Marshall, KYGCH(3), KCT, 33°, is a Past Grand Commander of the Grand Commandery of Knights Templar of Alabama. He is a member of the Editorial Review Board of the Knight Templar magazine and has published several articles in that magazine as well as in the Royal Arch Mason magazine. He can be reached at geomarsh@yahoo.com.