The Arthur MacArthur who is the subject of this article is interesting, nonetheless. He was born at Troy, New York, on July 24, 1850, the son of Colonel Charles Lafayette MacArthur and Susan Colgrove MacArthur. He received his early education at St. Paul's Parish School and the Troy Academy, graduating from the latter. He studied engineering for two years at Rensselaer Polytechnic Institute and then turned to the study of medicine by reading medicine books in the office of a local doctor. However, he ultimately ended up working at the newspaper, Troy Northern Budget, where his father was both proprietor and editor. (Lawrence)

He was present to witness the battle between the ironclad ships Monitor and Merrimack at Hampton Roads, Virginia in 1862 while visiting his father who was then a captain and stationed at Fort Monroe, Virginia. This memorable event stayed with him the rest of his life, particularly because the armor plates for the Monitor were made at Troy, New York. (Lawrence)

He married Ella Elizabeth Griffin in 1877, and this union produced two children; a son, Charles A. MacArthur, and a daughter, Susan C. MacArthur. Mrs. MacArthur died on October 18, 1907, while undergoing an operation, after thirty years of happily married life. Like her husband, she was well known in society circles and took a deep interest in philanthropic affairs. (Lawrence; New York Times)

Sir Knight MacArthur was also extremely patriotic and was a direct descendant of men who had fought in the Revolutionary War and the War of 1812. He joined the Troy Citizens Corps (a local militia group) where he rose to the rank of Major (Judson) and was later appointed by the governor of New York as Assistant Paymaster General with the rank of Colonel, serving as such during the Spanish-American War and went to Tampa, Florida when the New York troops were mustered out to pay them off. He was also an active member of the Sons of the American Revolution, the Society of the Second War with Great Britain, and of the Army and Navy Club of New York City. (Lawrence)

In his life work as a newspaper man, Sir Knight MacArthur followed his father's example in never publishing anything which might offend the most conservative reader. No scandal ever appeared in his paper, and it was always open to assist the poor and any worthwhile charitable effort. During the holiday season each year, an appeal for food and clothing for the needy was made at his direction in the columns of the Budget, and receipts were distributed on New Year's Eve by means of the Salvation Army, in which he had faith that his charity would be ably carried out.

Sir Knight MacArthur had a long and distinguished Masonic career, of which only a portion will be presented here. He was initiated in Mt. Zion Lodge No. 311 in Troy on 10/28/1872, passed on 11/17/1872, and raised on 11/25/1872. He was elected Worshipful Master in 1883. He had the pleasure of raising his son and was appointed a District Deputy Grand Master in 1883. He was Exalted in Apollo Chapter No. 48, Royal Arch Masons, in 1874 and was its High Priest in 1883. He was Received and Greeted in Bloss Council No. 14, Royal & Select Masters, in 1880 and served as Illustrious Master in 1891. He was Knighted in Apollo Corm mandery No. 15, Knights Templar, in 1880 and served as Eminent Commander in 1887 and 1888. He was also zealous in Scottish Rite Masonry, receiving the Lodge of Perfection and Chapter of Rose Croix degrees in 1884 and the Consis-tory degrees in 1886. In recognition of his leadership and service he received the 33rd degree in 1890 and in 1905 was Crowned an active member from the state of New York by the Supreme Council for the Northern Masonic Jurisdiction. He also became a life member of Oriental Temple, Nobles of the Mystic Shrine. (Masonic Standard)

In the Grand Encampment of Knights Templar, he was appointed Grand Sword Bearer at the 27 t Triennial Conclave at Pittsburg, Pennsylvania. In 1901 at Louisville, he was appointed Grand Jr. Warden and in 1904 was advanced to Grand Sr. Warden. In 1910 at Chicago, he was elected Deputy Grand Master, and finally at the 32nd Triennial Conclave held in Denver on August 14, 1913, he was elected Grand Master. In the fall of 1913 he visited the Canal Zone and instituted the first Commandery ever established in that part of the world. He travelled to many Commanderies and Grand Corn-manderies, and had he lived, would have presided at the 33 Triennial Conclave held in Los Angeles.

Most Eminent Sir Knight MacArthur was a member of many other Masonic appendant bodies which space does not permit listing here. His last public appearance as Grand Master was at the Christmas observance held by his home Commandery on December 25, 1914, two days before his death. The final summons came on December 27, 1914, at his home in Troy while his daughter was at church. When she returned home, she found her father reclining on a couch in his library and not responding. She called her brother who in turn summoned physicians, and upon their examination, it was determined that he had died suddenly of "valvular heart disease" (The Builder Magazine)

As his obituary put it, "Thus passed away a loving father, a true friend, an upright citizen, a fearless editor, a loyal patriot, and a great and noble Mason." (The Builder Magazine) 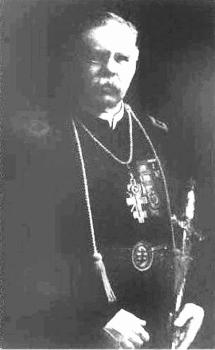 R.E. Sir Knight Marshall, KYGCH(3), KCT, 330, is a Past Grand Commander of the Grand Commandery of Knights Templar of Alabama. He is a member of the Editorial Review Board of the Knight Templar magazine and has published several articles in that magazine as well as in the Royal Arch Mason magazine. He can be reached at geomarsh@yahoo.com