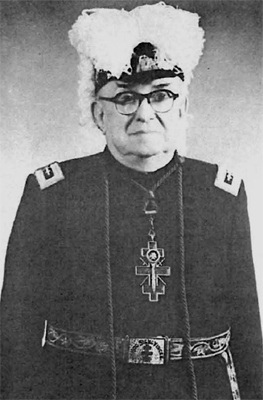 Paul M. Moore was born and raised on a farm near New Concord, Ohio, on January 1, 1878, the son of William A. Moore (1848-1925) and Nancy Ann (Miller) Moore (1847-1937). His sister was Ivy Pearl (Moore) Milligan (1875-1958) and his brother was James Russell Moore (1880-1963). He graduated from New Concord High School in 1895 and graduated in 1899 from Muskingum College in New Concord.
After graduation from Muskingum, he found work in Pittsburgh, Pennsylvania, with the Jones & Laughlin Steel Corporation as a laborer and worked up to assistant superintendent of transportation and labor. In 1906 he was sent to prepare the ground for a new steel plant, to be known as the Aliquippa Works of the Jones & Laughlin Steel Corporation, and a town for the employees of the new plant. The town was named Woodlawn (later to become Aliquippa). He was elected the first president of theWoodlawn Borough Council and served for six years.
He left the steel firm in 1912 to found the P. M. Moore builders’ supply company that constructed many of the neighborhood houses for the steel workers These homes, which were completed at a one per day rate, included a living room, dining room, kitchen, three bedrooms, a bathroom, and indoor plumbing. [At some point, likely during the years 1917-1921, he married Jessie Christie Moore (1897 – 1924), but I have not been able to find the exact date.] He retired from business in 1950 but still served as a member of the company’s board of directors.
He served on the Board of Trustees of Muskingum College for over thirty years and also as president of that board. In 1948 the college awarded him the honorary degree of doctor of humanities. He was instrumental in founding several Beaver County, Pennsylvania institutions, civic organizations, and service groups. He was one of the organizers in 1910 of the former Woodlawn Trust Company, later the Mellon National Bank and Trust Company of Aliquippa, and served as its president for thirty-two years. He aided in establishing Boy Scout organizations in Beaver County and received Scouting’s Silver Beaver Award, the highest adult award presented for outstanding service to scouting at the local (Council) level. He also helped to establish the Aliquippa Golf Club, the Rotary Club, the Community Chest, and the Aliquippa Concert Band and was a member of the initial Board of Directors of the Aliquippa Hospital.
In 1957 he was honored by his home town by being selected as Aliquippa’s “Man of the Year.” In October of 1958, Muskingum College honored him by naming the new dormitory for freshman men “Moore Hall.” He was a member of the Woodlawn Presbyterian Church and for twenty years was president of the Board of Trustees.
In Freemasonry, he became a Master Mason in St. James Lodge 457 in May of 1910. He resigned in 1913 to become a charter member of Woodlawn Lodge 672 and served as its worshipful master 1914-15. He paid off the lodge mortgage debt in 1962.
He became a Royal Arch Mason in May of 1913 in Eureka Chapter 167, Rochester, Pennsylvania, and was high priest in 1918. In 1915 he was greeted a Select Master of Mt. Moriah Council No. 2, Pittsburgh, Pennsylvania, resigning in 1918 to become a charter member of Beaver Valley Council 54, Beaver Falls, Pennsylvania, and was thrice illustrious master in 1923. Sir Knight Moore was also a member and past commander in 1924 of the Knights Templar, Beaver Valley Commandery 84. He later became the grand commander of Pennsylvania in 1939.
He was a Scottish Rite Mason in the Valley of New Castle, Pennsylvania and received the 33° in September of 1919. He was a member and past prior of Keystone Priory 26, KYCH, Pittsburgh, Pennsylvania. He was a member of Antioch Conclave, Red Cross of Constantine, New Castle, Pennsylvania. He became a member of Syria Shrine Temple, Pittsburgh, Pennsylvania, in 1915.
In 1943 he was appointed grand captain of the guard of the Grand Encampment and progressed through the offices, culminating in his election and installation as most eminent grand master of the Grand Encampment at the 48th Triennial Conclave in August of 1961. Some notable actions that occurred during his triennium are as follows: charters were issued to Hermann Von Salza 1 and Heidelberg Commandery 2 in Germany; a charter was issued to the Grand Commandery of the Philippines; a joint York Rite commission to promote York Rite unity was appointed; beginning with the November 1961 issue, the Knight Templar magazine was published monthly at a subscription rate of $1.00 per year with Sir Knight Willard Avery as editor. At this conclave, the Knight Templar Cross of Honor award was approved. Finally, the Committee on Ritual established a Spanish language version of the Templar Ritual and Tactics which was subsequently adopted.
Right Eminent Sir Knight Moore died in April of 1966 on Good Friday evening. He was in Washington, D.C. to attend the Knights Templar Easter Sunrise Services at Arlington Cemetery and was rushed back to the Aliquippa Hospital where he died on April 8, 1966. He was entombed at New Concord Cemetery, New Concord, Ohio. His wife was later exhumed and entombed with him. His crypt has the inscription beneath his name which reads, “Grand Master Grand Encampment of Knights Templar of the USA 1961-1963.”

Right Eminent Sir Knight Marshall, KYGCH(3), KCT, 33°, is a past grand commander of the Grand Commandery of Knights Templar of Alabama. He is a member of the Editorial Review Board of the Knight Templar magazine and has published several articles in that magazine as well as in the Royal Arch Mason magazine. He can be reached at geomarsh@yahoo.com.