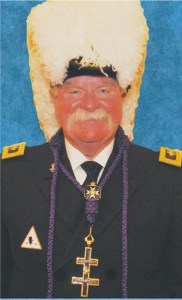 SIR WILLIAM SEWALL GARDNER, 8th Grand Master of the Grand Encampment of the United States from 1868 to 1871.

The subject of this brief memoir, whose portrait, as an accompaniment to the present volume of the Proceedings of the Grand Encampment of the United States, has been furnished by the Grand Commandery of Massachusetts and Rhode Island, was born at Hallowell, in the State of Maine, October 1, 1827, and is the only son of Robert and Susannah Sewall Gardner, of that place.

Having completed the usual course of elementary studies taught in the public schools of his native town, he at once entered upon the higher branches of education, and in September, 1846, entered as a Freshman at Bowdoin College, Brunswick, Maine. In September, 1850, he graduated, having attained high rank in his class as a scholar, and was assigned the subject of "Individual Liberty" as a thesis in the graduating exercises. Among his classmates were Gen. O. O. Howard, of the United States Army, and Professor C. C. Everett, of Harvard College.

His parents having removed, in 1846, to Lowell, he commenced the study of law in that city, and in November, 1852, was admitted to the bar, having successfully passed the required examination before the Hon. Caleb Cashing, then one of the Judges of the Supreme Judicial Court of Massachusetts; and in the winter of 1852-3 he visited most of the Southern and Western States, with a view to a settlement in the practice of his profession, but not meeting with sufficient inducements he returned to Massachusetts and opened an office in Lowell in March, 1853, where he continued the practice of his profession on his individual account until February, 1855, when he entered into a copartnership with the Hon. Theodore H. Sweetser, one of the most eloquent and successful advocates at the Massachusetts bar. In December, 1861, the firm removed their office from Lowell to Boston, where it still remains.

On the 15th of October, 1868, our Brother married Mary Thornton Davis, and became a resident of Boston, but owing to the ill-health of his wife, soon after removed to the suburban town of Newton, where he at present resides, having increased his family by the addition of a daughter.

The Masonic history of our distinguished Brother dates from the 1st of August, 1852, when he was initiated into Masonry in Ancient York Lodge, working under Dispensation at Lowell. He was among the first of its initiates, and so warm and hearty was the interest he took in its success, and so manifest were his qualifications for future usefulness, that he soon after received the appointment of Senior Deacon, an office of only secondary importance in the working of the Ritual. The Lodge having been organized under its Charter, he was early elected its Senior Warden, and subsequently became its Worshipful Master, holding the latter office during the years 1855, '56, and part of 1857, when he was appointed Grand Marshal of the Grand Lodge by M. W. John T. Heard. The two offices being constitutionally incompatible, he resigned the office of Master of the Lodge, and continued to discharge the duties of Grand Marshal during the three years of Bro. Heard's Grand Mastership.

In 1867 he was appointed Master of Kilwinning Lodge, at Lowell, (hen working under Dispensation. The Lodge having received its Charter the following year, he was unanimously elected its first Worshipful Master, and became an affiliated member of it, having previously, for this purpose, dissolved his connection with Ancient York Lodge.

While Master of the former Lodge, in December, 1868, he received his first election as Grand Master of the Grand Lodge of Massachusetts, and was re-elected to the same office in 1869 and 1870 — in both the latter years by the unanimous vote of his Brethren. And it is worthy of note in this connection as indicative of the conscientious fidelity with which he has fulfilled all his official Masonic duties, that he has been present at every meeting of the Grand Lodge from December, 1854, to December, 1871, with three exceptions, namely: once when detained by pressing business engagements, and twice when attending the meetings of the Grand Encampment of the United States. Such instances of devotion to duty are of too rare occurrence.

In 1853 our Brother was made a Royal Arch Mason in Mount Horeb Chapter, at Lowell, but has held no official position in Capitular Masonry. It is not, however, to be inferred from this fact, that he has, in any respect, been remiss in his duties, or neglectful of the interests of this branch of our Institution, but rather that his many and pressing labors in other fields have left him little time to cultivate this. That he has, however, faithfully and carefully studied its history, and made himself proficient in its general characteristics and Masonic importance, is amply verified by the learning and research manifest in the eloquent Centennial Oration delivered by him before St. Andrew's Royal Arch Chapter of Boston, in September, 1868 — a production eminently worthy of his own reputation as a Masonic scholar, and of the ancient Body before which it was pronounced.

In the spring of 1854 he received the Orders of Knighthood in the Boston Encampment' of Knights Templars, and soon after united with the Sir Knights at Lowell, in a petition for the establishment of Pilgrim Encampment in that city, and was appointed its first Junior Warden. On the 10th of October, 1855, this Encampment was organized under its Charter, when our Brother was elected its first Captain General, and subsequently its Generalissimo, and, finally, its Commander. In the latter office he served during the years 1861-2-3, and contributed, by his talents and energies, to raise it to the rank It now holds, as one of the finest Bodies of its class in the jurisdiction. Having served in the Grand Encampment of Massachusetts and Rhode Island as Junior and Senior Grand Wardens, he was, in 1860, elected its Grand Captain General, which office he held for two years, when, in 1862, he was advanced to that of Generalissimo, and in 1868 he was elected its Grand Commander, and served as each the two following years. During his administration as its Grand Commander he wrote the history of the Body, asd sketched with distinguished ability and learning the introduction and early annals of the Order in the United States.

At the Seventeenth Triennial Session of the Grand Encampment of the United States, held at Columbus, Ohio, in September, 1865, be was elected Deputy Grand Master of that distinguished Body; and at its following Triennial Session, held at St. Louis in September, 1868, he was honored with its Grand Mastership. So unexceptionably and ably had he discharged the arduous and delicate duties of this high position, and so popular had been his administration of its affairs, that his Companions, representing all parts of the United States, at the late Session of the Body in Baltimore would joyfully have continued him as their cherished Commander for another term of three years; bat this honor, complimentary as it was, he felt himself from "personal considerations, imperatively obliged to decline.

In May, 1857, our Companion connected himself with the Ancient and Accepted Scottish Rite of Masonry, and was successively advanced in the Grand Consistory of Massachusetts, held at Boston under the authority of the Supreme Council for the Northern Jurisdiction of the United States, through all the grades of the Rite to the 32°, and immediately after united with the Brethren of the Rite at Lowell in the organization of a Lodge of Perfection and Council of Princes of Jerusalem in that city. As the chief officer of the Council, he conferred the degrees of both Bodies, with more of the beautiful and impressive ceremonies than was common at that period in any part of the jurisdiction. In 1859 he was mainly instrumental in the establishment of the Massachusetts Consistory at Lowell (now removed to Boston), over which he presided for three years, conferring in full all the more important degrees of this division of the Rite. On the 16th of May, 1861, he was elected Sovereign Grand Inspector General, 33°, and active member of the Supreme Council, and was immediately appointed its Deputy for Massachusetts, which office he held until the union of the two contesting Councils in 1867. In tins branch of Masonry, as in all its other branches, his labors have been wise, faithful, and eminently successful, and to him are the members of the Rite largely indebted for the high and commending place it now occupies as a leading power in the Masonry of the country.

Nor have his services end talents, voluntarily rendered in behalf of our beloved Institution in all its various grades and departments, failed to command that recognition which is conspicuously their due. They have won for him eminent distinction in the Craft throughout the country, and, what is doubtless of more value and mere gratifying to him personally, they have earned for him a high and honorable place in the respect and affection of his Brethren. And ia this connection, it may not be out of place to mention, that he has been complimented with Honorary Membership in many of our oldest and most respectable Masonic organizations; among which are St. Andrew's Royal Arch Chapter and St. Bernard Commandery, of Boston; Apollo Commandery, Chicago; St. John's Philadelphia; Missouri, St. Louis, and others; and, on the Tenth Anniversary of the Union of German Free-masons, held at Darmstadt on the 23d of July, 1871, he was elected Corresponding Member of that Body and honored with its Diploma.

In politics our Brother has rarely mingled, believing that in this respect "the post of honor is a private station." The turmoils and strifes of the political arena are net agreeable to his tastes, nor consistent with his profession and literary pursuits — a conclusion to which he seems to have arrived after having served the city of his residence as a member of its Board of Aldermen for a term of two years. As a Masonic writer and historian, our Brother occupied a high rank among the Masonic literati of this country. Many of the ablest essays on our national and local Masonic history, in its various branches, are the fruits of his learning and the productions of his pen. His indefatigable industry and logical acumen, as evidenced by his various and profound antiquarian investigations, have enabled him to lay before his Brethren many of the most elaborate and valuable Masonic contributions of the day. But neither the limits of this memoir, nor the time of the writer, admit of a specific enumeration of them. That must be the work of another time and another pen. And we close this brief and imperfect sketch with the perhaps unnecessary remark — unnecessary wherever he is personally known — that as a presiding officer, a courteous gentleman, and a ripe Masonic scholar, our Brother justly enjoys the love and respect of his personal friends and Masonic Brethren wherever he is known, at home or abroad.