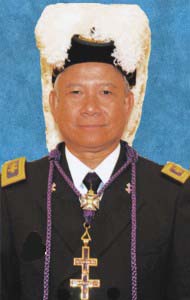 John Q. A. Fellows was born at Topsham, Orange County, Vermont, on April 3, 1825. He received his early education in the neighborhood public schools. At fifteen he began teaching school in the winter and working on the farm in the summer to accumulate funds to enter college. At twenty-two he entered the University of Vermont and graduated on August 1, 1849. He then moved to New Orleans, arriving there on December 17, 1850. He attended the Law Department of the University of Louisiana, and after graduating in 1852 he began the practice of law in New Orleans. On March 14, 1858, he married Miss Elizabeth Mills of Burlington, Vermont. He soon had an active law practice and continued with remarkable success until 1895, when a long and severe illness compelled him to retire. After long months of patient suffering he passed away quietly at his home on November 28, 1897.
Sir Knights Fellows received the Masters Degree in Rising Sun Lodge No. 7 at Royalton, Vermont, on November 28, 1849. On moving to New Orleans, he affiliated with Marion Lodge No. 68. He was elected Worshipful Master in 1857. From 1854 he was active in the Grand Lodge serving on important committees. In 1860 he was elected Grand Master of the Grand Lodge of Louisiana and held that office until 1866.
He received the Mark Masters Degree in Bethel Mark Lodge at Royalton, Vermont, on February 20, 1850. This lodge merged into Randolph Royal Arch Chapter No. 5 and its work was legitimized by the Grand Chapter of Vermont in August, 1850. On Moving to New Orleans, Fellows withdrew from Randolph Chapter and received the other degrees in Orleans Chapter No. 1 in 1852. He served as High Priest in 1855, and in 1859 became Grand High Priest of the Grand Chapter of Louisiana.
He was greeted in Louisiana Council No. 2 in February, 1854. On October 6, 1855, he withdrew from Louisiana Council and assisted in the organization of Orleans Council No. 4 of which he was the first Thrice Illustrious Master. He took an active part in the formation of the Grand Council of Louisiana and was Grand Master in 1868.
He received the 321 of the Ancient and Accepted Scottish Rite in the Grand Consistory of Louisiana on August 1, 1856, and the 331 on February 12, 1857.
He received the Orders of Knighthood in Indivisible Friends Commandery No. 1 on August 4, 1856, and represented his Commandery in the Grand Encampment at the Conclave held in Hartford, Connecticut in September of that same year. In 1860 he assisted in the organization of Orleans Commandery No. 3 and became its first Eminent Commander. He promoted the formation of the Grand Commandery of Louisiana and was the Grand Commander in 1865. He attended the Triennial meetings of the Grand Encampment from 1856, missing only the meeting of 1862 on account of the Civil War. In 1865 he was elected Grand Generalissimo of the Grand Encampment, in 1868 Deputy Grand Master, and at the Conclave held in Boston in 1871, he was elected Grand Master.
Sir Knight Fellows met with firmness and tact the many problems and controversies that arose during the period of adjustment that followed the Civil War. At the Conclave of 1874 he made his report, which included forty-three decisions. The Committee on Jurisprudence submitted a unanimous report sustaining all his decisions, which was adopted without a negative vote. This remains a remarkable and outstanding record in the annals of the Order.
After he retired from the office of Grand Master, he continued to serve the Order he loved so well, acting on the Committee of Jurisprudence. His wise counsel and ready suggestions were always at the command of the Grand Encampment. For more than fifty years he gave his best efforts to the Order. With kindness yet with firmness he upheld the high standards of Christian Knighthood at all times. He was a commanding figure in the Order due to his scholarly attainments and his pleasant and magnetic manner.